Visit from a bald angel 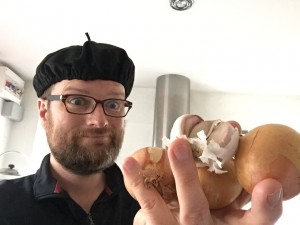 Two knocks at the door this morning – one from Jo Healey from East Midlands Today to talk about the upcoming filming (Looks like scheduled for the 13th), and then half an hour later, a shimmering egglike vision of mercy in the form of Kerry Clarkson.

Kerry recently had her head shaved along with some friends to raise money for Macmillan Cancer Support as a gesture of solidarity with a friend recently diagnosed with breast cancer. She was popping round with a “survival pack” for me: 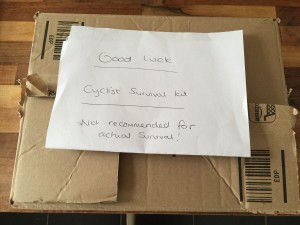 All of these items are completely essential, as you might imagine – the sports nutrition stuff is particularly so, though – look what it’s got in it 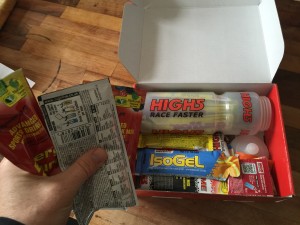 That’s a bottle and loads of sachets of caffeine and calorie laced leg fuel. It’s good stuff that, I’ve used some of them before. I’ve had occasions where my legs have just completely run out of steam, and the input of sugary filth can really help – normally it’s troughing down loads of jelly babies or fruit pastilles, but these sorts of drinks are even better. The caffeine helps you exercise too.

Thanks Kerry! Anyone who can imagine how mortifying it is for a lady to wander around as bald as a coot, please consider donating to Kerry & Friends – cancer’s way worse than the stuff I have to deal with!