This post is dedicated to Shaun – the best cyclist’s butler a man could wish for. He’s come along just to help us all out – driving the car from place to place and checking into the hotels in advance for us, making sure all’s well and even carrying our cases to the rooms. Yesterday he was worried about us cycling so far in the heat and bought cold drinks for us which he kept cool in the sink. There’s a knighthood in this for him if I ever become Queen.

Today we had to be at the ferry terminal for 8am to check in, which necessitated setting off from the hotel at around 7:50. Working backwards, we had to be out of the hotel by 7.30 to get the bike rack on the car and attach the bikes. Sadly, this meant we couldn’t eat the breakfast we’d paid for at the B&B. Such is life. We knew we’d be able to get a decent breakfast on the ferry anyway – I was hoping for croissants and cheese and thankfully those hopes were well founded.

As we were packing I looked at the printout of the ferry booking, and briefly all the springs came out of my brain as I realised I’d booked the Sunday crossing rather than the Monday. I was philosophical about it and reasoned we’d just have to sort it out when we got there. I was immensely pleased to discover moments later that my idiocy was a temporary current matter, rather than at the time of booking – I was looking at the return crossing NEXT Sunday, so all was well.

We were searched briefly at the ferry terminal – I had joked on the way in that I’d probably search us. I’ve never been searched as a family but four guys travelling together are a little more suspicious I guess. They asked if we had any gas canisters on us, or guns – and at that point rich said “Yes!” – at which the man was rather taken aback as he thought he was admitting to guns, but it was just a gas canister and all was well, and we were sent on our way.

We’d booked a cabin on the ferry so after having a civilised breakfast and wander about on the deck, I had a bit of a nap. Then I woke up and had a half pint of Strongbow (my first semi-manly drink of the trip so far) and shortly after Shaun and I had an hour and a half’s more nap, and then we woke up just as land was heaving into view. There was the usual brief mental readjustment to driving on the wrong side of the road, and then all was well. We stuck the car in an underground car park, took the bikes off the back, disassembled the bike rack, took the wheels off the bikes and backed the car up against the wall so nobody could steal them even if they wanted to.

After settling into our hotel we went for a wander about – there was a beautiful but tatty cathedral that we wandered around, and we went to the seafront for ice creams, slushes and to chuck some stones at other stones – a fine pastime. Then we came back into town and had a pizza and some drinks (just Orangina for me) at a nice bar/restaurant in the centre, and came back to bed.

One last pic of our butler, our bagman, our beloved Sancho Panza: 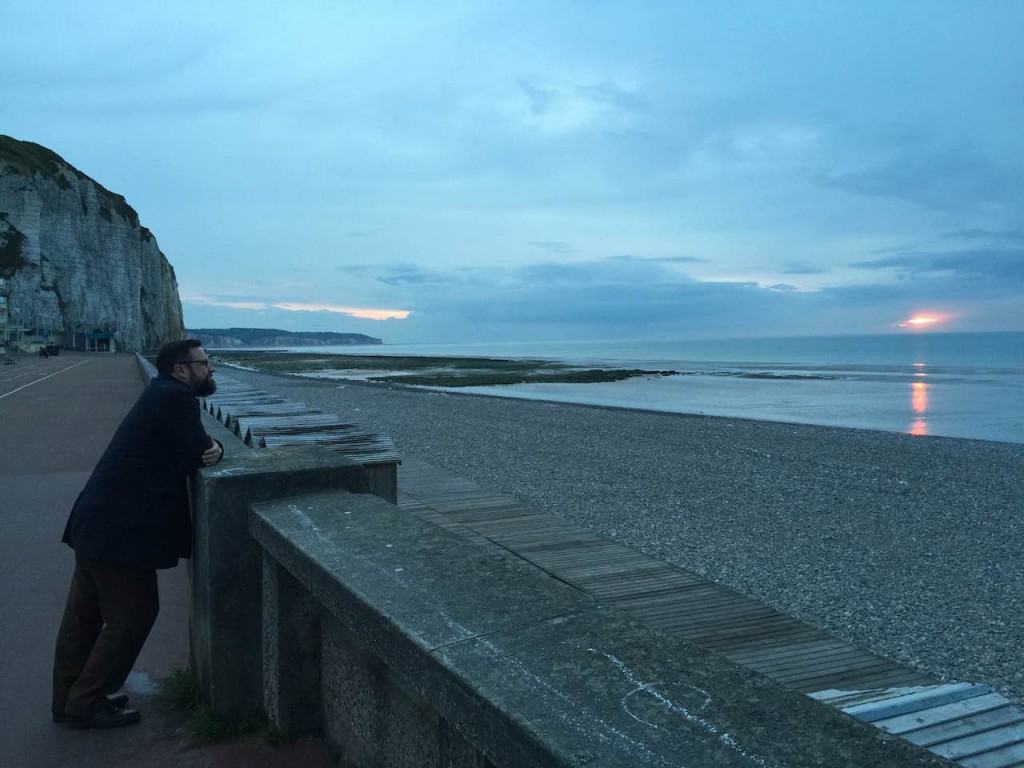